You should read this for 4/9/2017: Look Ma! A plagiarizer has the gavel, now even students can fact check your ass, and lunch shaming is shameful, but lunch is better with Kale. And potatoes. And Sausage.

Gorsuch’s writings borrow from other authors “several passages from the tenth chapter of his 2006 book, The Future of Assisted Suicide and Euthanasia, read nearly verbatim to a 1984 article in the Indiana Law Journal. In several other instances in that book and an academic article published in 2000, Gorsuch borrowed from the ideas, quotes and structures of scholarly and legal works without citing them.” Yep. That’s plagiarism. That’s not borrowing; it’s theft, and it is not ok, acceptable or “normal.”

Via The New York Times: New Mexico Outlaws School ‘Lunch Shaming’
“What is ‘lunch shaming?’ It happens when a child can’t pay a school lunch bill.”

Kale, Potatoes, and Sausage Soup Some soups work for Winter and Spring; this is one of them.

Indivisible: Stories of American Community Indivisible: Stories of American Community is an exploration of community life in America by some of this country’s most accomplished photographers, radio producers, and folklorists. Here are the stories of twelve communities where people are coming together to make their small piece of the world a better place to live.

Via Scotland’s Wellcome Library Names of the witches (in Scotland) c. 1658 Read more about it here; and see a transcript of names here.

Via The Verge: The 265 members of Congress who sold you out to ISPs, and how much it cost to buy them (Hint: they’re cheap). “Republicans in Congress just voted to reverse a landmark FCC privacy rule that opens the door for ISPs to sell customer data. Lawmakers provided no credible reason for this being in the interest of Americans, except for vague platitudes about “consumer choice” and “free markets,” as if consumers at the mercy of their local internet monopoly are craving to have their web history quietly sold to marketers and any other third party willing to pay.

How Uber Deceives the Authorities WorldwideThere’s even more to the Uber sleaziness.

Via Southern Living: Angel Biscuits This is an interesting recipe, half biscuit, half roll, and it uses yeast, buttermilk, and baking powder for leavening.

You should read this for 3/5/2017: Big data and politics means money, death served cold, read more, think more, do more, digital monks, she reads way more than he does,  and scones.

Robert Mercer: the big data billionaire waging war on mainstream media “With links to Donald Trump, Steve Bannon and Nigel Farage, the rightwing US computer scientist [Robert Mercer] is at the heart of a multimillion-dollar propaganda network.”

Slain SEAL’s dad wants answers: ‘Don’t hide behind my son’s death’. Not surprisingly, he’s being mostly ignored by the man who casually decided to send men to their deaths, over dinner, with inadequate advice, for a mission of very little value or point.

Ken Norton of Google Ventures on How I Read More Books. Norton notes that “I read 61 books last year and it was easier than I thought.” Norton offers specific suggestions, and a link to another really interesting piece on Warren Buffett’s reading habits. 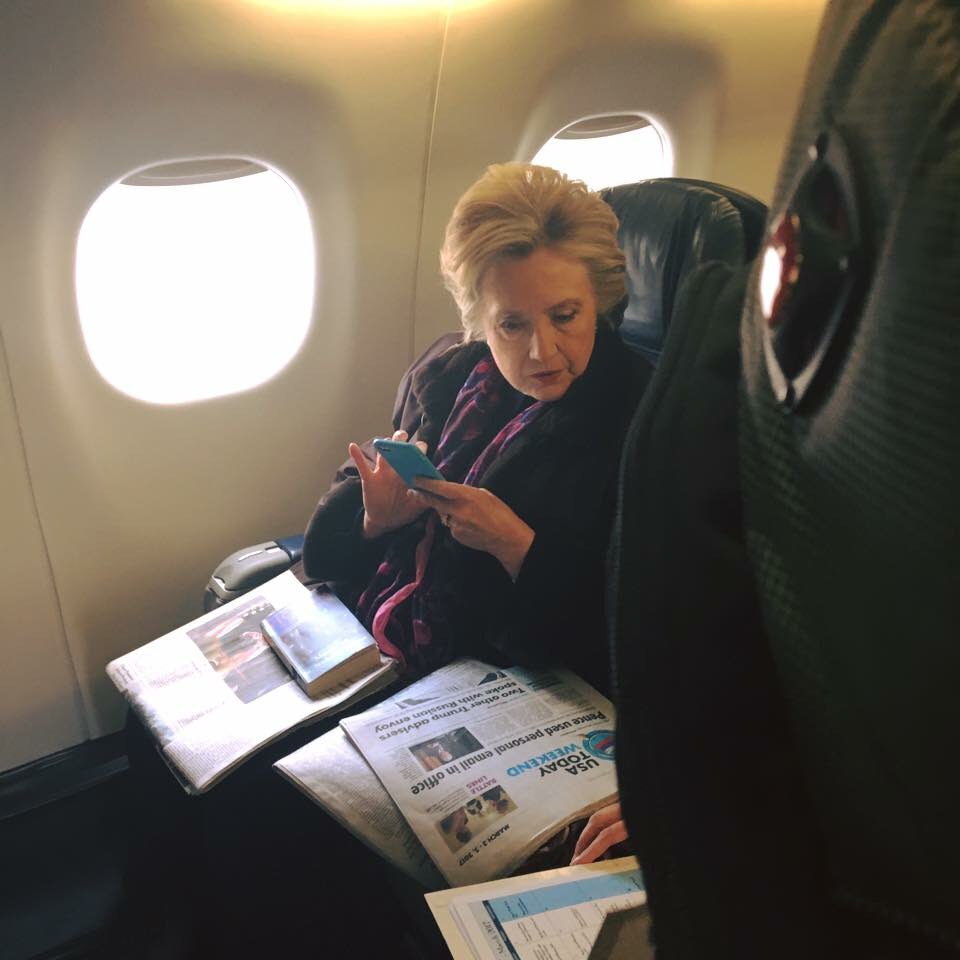 You guys, my friend is on the same plane as Hillary Clinton. Zoom in on the title of the article she’s looking at. pic.twitter.com/356oE9uT0s

And in case you»re wondering, the paperback book Ms. Clinton is reading is Murder on St. Nicholas Avenue by Victoria Thompson.

Cream scones easy, and delicious. And it’s that kind of weather.

Zell Liew on How to choose and pair typefaces

Outsmarted: On the liberal cult of the cognitive elite or “What does it mean to be ‘smart,’ and why does it matter to us so much?”

Via Medium: Chris Coyier I was strongly reminded about the scariness of non-secure websites the other day.

Poachers just killed a beloved white rhino — inside a French zoo “Wildlife crime is run by organized crime syndicates with very complex networks of middlemen moving rhino horns from Africa and India to networks in Southeast Asia. With the poaching crisis at such an alarming rate, it was sadly only a matter of time before these animals in zoos and other protected areas were targeted.”

Ex-Hillary Clinton Campaign Manager: What I Wish I Knew About Russian Hacks

If You See Something, Save Something – 6 Ways to Save Pages In the Wayback Machine | Internet Archive Blogs

Trump, Offering No Evidence, Says Obama Tapped His Phones“Democrats sharply criticized [💩🔥💰’s] calls on lawmakers Sunday to investigate his baseless claim that former President Barack Obama tapped his phone.” Meanwhile, Comey Asks Justice Dept. to Reject Trump’s Wiretapping Claim and ‘DESTRUCTIVE, BASELESS, RECKLESS:’ WASHINGTON RESPONDS TO TRUMP WIRETAPPING CLAIMS in which “President Obama’s former director of national intelligence denied there ever was a federal court order authorizing wiretapping of Donald Trump properties on a day when the chair of the House intelligence committee said it would heed the president’s call for a Congressional probe of his unsubstantiated surveillance claims.” US Supreme Court held in 1972 that POTUS cannot unilaterally order domestic wiretaps.

From Time: This Is the Real Reason Apple Is Fighting the FBI

Via The New Yorker: The Radical Argument of the New Oxford Shakespeare

“Though some people may think the job involves more shushing than rallying, many librarians consider “making America read again” to be a radical political proposition.” “Librarians decide what gets preserved and how information is classified, which inherently affects how people find that information and who is likely to find.” In other words, Librarians are the best kind of Finding Aids.

Rumana Ahmed via The Atlantic: “I thought I should try to stay on the NSC staff during the [current] Administration, in order to give the new president and his aides a more nuanced view of Islam, and of America’s Muslim citizens.
I lasted eight days.”

Via Simply Recipes: How to Make Overnight Oatmeal

NPR: Trump Ethics Monitor: Has The President Kept His Promises?

You should read this for 2/5/2017:  Protection for priests, clams, and refugees, and sauce for chimney Sweepers who eat steak

On the Pacific Northwest coast, indigenous groups are reinvigorating the ancient practice of clam gardening. And see also: Can ancient “clam gardens” teach us how to farm better today? “The clam gardens were constructed as a series of stone terraces on specific parts of the shore to protect them from the sea, basically making calmer pools where clams can grow more safely and easily.”

And yes, I’ll be deliberately patronizing Starbucks. along with other caring businesses like Penzey’s.

Chimichurri Sauce Argentinean Marinade that you really need to try on a steak.

5 Questions About The Law And 💩🔥💰’s Immigration Order

Park Rangers to the Rescue “But what is different with this administration, from that very first attempt to snuff a truth about the size of the crowd on the lovingly restored National Mall grass, is they’re trying to institutionalize lying. The fish is going to stink from the head down.”

Via NPR: After 2 Weeks In Office, 💩🔥💰 Faces More Than 50 Lawsuits Far more than his predecessors faced in their first days on the job”—40 or more just in response to Trumps EO regarding refugees and travel.

You should read this for 1/08/2017:Acknowledging community history in Australia; poorly conceived test questions, 💩🔥💰’s avalanche of cleansing, and Baked beans from Maine

What Does It Mean to Acknowledge the Past? “Gathering together to listen to speeches and watch performances is one way civilizations share values. These events can foster community as well as breed animus, as we saw Donald J. Trump so successfully accomplish in his campaign rallies. Since the election, white supremacists and perpetuators of hate speech appear to be emboldened. In this political climate, the words we use and the traditions we champion matter more than ever.”

And so it begins: 💩🔥💰’s Purge Of Non-Loyalists Takes Shape Using an obscure 1876 rule that allows them to cut any federal employee’s pay to $1, the GOP Congress begins to set up for the purge of non-loyal-to-Trump federal employees that Donald Trump’s team has been talking about.

Poet Sara Holbrook can’t answer questions on Texas standardized tests about her own poems, and doesn’t understand why they would be used as source material in any case.

You should read this for 1/01/2017: Chrismakkah, practical rebellion against evil, food and politics, and it’s ok to omit records if you’re Jeff.

Via Matthew d’Ancona in The Guardian How do liberals halt the march of the right? Stand our ground and toughen up These are specific, practical suggestions that anyone can implement.

Helen Rosner of Eater.com interviews Anthony Bourdain Anthony Bourdain: The Post-Election Interview “But the threshold of acceptable rhetoric right now, the threshold of hate and animus that’s being shown at this point — this really naked hatred of every flavor, racists, sexists, pure misogyny, class hatred, hatred of the educated — this is something I’ve never seen before. And it’s now acceptable! It’s more acceptable in public at political rallies than it is at universities, which is where people should be saying offensive shit.”

A professor called 💩🔥💰’s election an ‘act of terrorism.’ Then she became the victim of terror. “For as long as she has taught, Cox, a professor at Orange Coast College in Costa Mesa, Calif., has prided herself on speaking freely. Then a clip of her calling Donald 💩🔥💰’s election “an act of terrorism” went viral earlier this month, unleashing a wave of violent threats that forced her to end her semester early and flee her home in suburban Orange County.”

Jeff Sessions, Donald 💩🔥💰’s nominee for Attorney General of the U.S has omitted decades of records (including email) for his confirmation hearing. He previously argued that omissions should be a felony.

You should read this for 12/25/2016: Encouraging kindness in social networks, a Trumpish short story, finding the lost kingdoms, and Spirograph is even better than you remembered.

Kevin Barrett of Postlight on Building Kind Social Networks“In reality, addressing abuse is not a scale, but a switch.”

A five year project to investigate the “lost” kingdoms of Northern Europe.

Via Ars Technia: The Greatest Spirograph in the World. Really. Watch the videos.

And the complete A Christmas Carol by Charles Dickens, annotated.

Via The New York Post The chilling stories behind Japan’s ‘evaporating people’“Of the many oddities that are culturally specific to Japan — from cat cafés to graveyard eviction notices to the infamous Suicide Forest, where an estimated 100 people per year take their own lives — perhaps none is as little known, and curious, as “the evaporated people.”

Jesus was not born in a stable. On the meaning of NT Greek Kataluma.

Via Amy Rawe An Open Apology To Dolly Parton There’s a lot more to Dolly Parton than just a fabulous singer, songwriter and musician.

And here’s how it looks from Canada; Scott Gilmore writing for Maclean’s on Russia’s American coup “But it happened, moment by moment, until we woke up in a cold day in December and realized that Moscow had effectively installed the next president of the United States.

That sounds hyperbolic, doesn’t it? Even writing it I have to pause and stare at that sentence. But these are the facts: The CIA and over a dozen other U.S. intelligence agencies have concluded Russia hacked into both the Republican and Democratic party computers. Senior Russian officials have admitted that they leaked the Democratic data to WikiLeaks. Those emails were then strategically published over the course of the presidential campaign. Why? A member of the House Intelligence Committee states there is ‘overwhelming evidence’ Russia’s goal was to elect Donald Trump.”